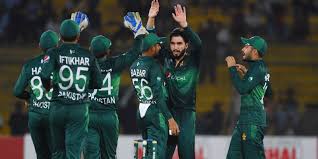 As Pakistan marked the return of ODI cricket in Karachi after 10 years, play was interrupted multiple times during the course of the match due to floodlight failure at the National Stadium.

Top-order batsman Babar Azam and fast-bowler Usman Shinwari starred as Pakistan defeated a luckless Sri Lanka side by 67 runs in the second One-day International (ODI) between the two sides at the National Stadium in Karachi on Monday. The first ODI was abandoned due to persistent rain.

Chasing a target of 306, Sri Lanka lost half their side in the first ten overs and were left reeling at 28 for 5.

Opener Sadeera Samarawickrama had his stumps removed early by Shinwari for 6 runs off 14 deliveries. Absolute carnage followed as Amir and Shinwari ran rampant against the Islanders.

Iftikhar hammered the last over for 20 runs to propel Pakistan to a total of 305 for 7. He remained unbeaten scoring 32 off 20 balls. The target set by Pakistan proved more than enough for the second string Sri Lanka side.

For his scintillating spell of fast-bowling, Shinwari bagged the award for the player of the match.