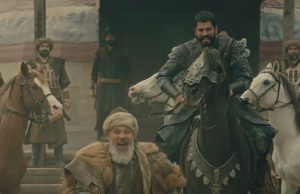 Audience: This episode is a little different from the rest. Because almost part of this episode has been about Uthman’s marriage.
Viewers call Sheikh Adibali Usman at the beginning of this episode Othman, to put an end to the anger of both the tribes He has to marry a woman.
When Usman hears this from Sheikh Adibali So very surprised And says my sheikh I am already married And the one I’m married to is your daughter.
Sheikh Adibali says my daughter cannot give you children And you need an heir for your tribe. The lady has spent a lot of time with you And she has been at war with you
She is a brave woman like you Therefore, your children should be good and brave women. Sheikh Adibali tells Usman that he will wait for your decision Let me know when you decide.
Nicola, on the other hand, stands ready to attack Togai Jason comes to Nicola and says I have searched Omar Sahib everywhere he should have been But I did not find Omar anywhere.
Upon hearing this, Nicola becomes furious. “We have a great opportunity,” Jason tells Nicola Let’s attack Togai with arrows He does not know that we are hiding here.
Nicola tells Jason that he can’t attack a fool like you Which is why Nathia is out of our hands Now go to your castle and pay taxes to Togai. It should feel like we are subject to it.
Usman tells Bamsi Sahib and Gunduz that Sheikh Adibali told me that We need to end the resentment of both tribes I have to marry Umar Sahb daughter. Both say to Uthman if you have been given this advice by Sheikh Adibali So you must marry her and she is attached to you.