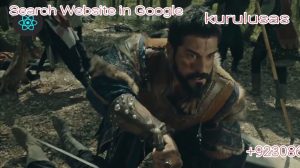 The beginning of this episode does not show a complete fight But the last part of the fight is shown.
In the last part of this battle, Usman and his other comrades fight a very fierce battle. This battle has to be fought by Togai Nicola and Kalanoos together.
But because of Usman’s superior strategy, the three deceive each other. The first togai retreats And Nicola, the two of them don’t take part in this fight.
Only Usman competes with Kalanus When Kalanoos thinks he is losing So he starts running there Sauchi sees Kalanos running away Sauchi also runs after Kalanos.
She is seen by a woman Mahlan says to the lady Usman, Usman Sahib Sauchi Sahib has gone alone behind Kalanos You go after your brother.
Usman also runs behind. Going forward, Callanos and his soldiers surround Sauchi. Kala Naws says to Sauchi, “Well, you came to die before ‘Usman.”
There is a fierce battle between Sauchi and Kalanoz After a fierce battle, Kalanos kills Sauchi from behind Which injures Sauchi.
That’s how Callanos does two or three times on Sauchi Usman also arrives there in such a short time. Seeing Usman, Kala Naws runs away from there.
Usman goes to Sauchi Sauchi says to Usman, “Brother, leave me and go after Kala Nawas.” Usman runs after Kalanoos.
Kala Naws runs away on his horse and leaves Usman runs and competes with the horse And finally catches the black nose.
He grabs the black snout and brings it to Sauchi, Sauchi tells Usman to kill Kalanoos In the meantime, Sauchi attains the status of a martyr.
After Sauchi’s martyrdom, Usman kills Kala Naws in the same way The way Kalanoos killed Sauchi This is how the black nose reaches its end.